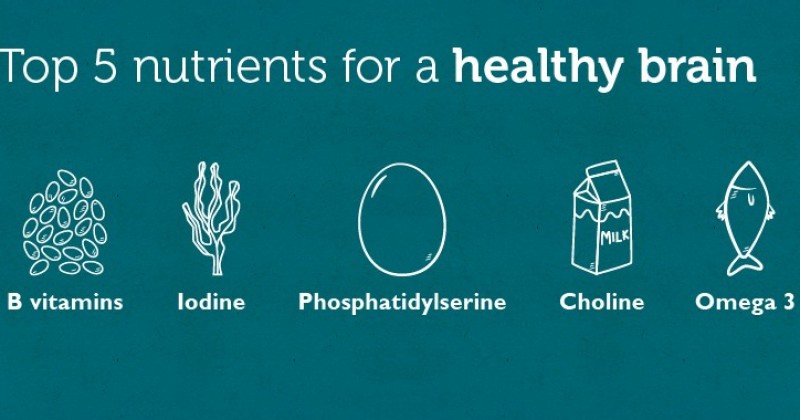 Did you know that good nutrition is vital to the health of your brain? It is in ways that might surprise you! For a long time the role of nutrition in mental and cognitive health has been neglected, but things are changing and we now know just how important brain foods and certain nutrients really are.

A healthy brain is linked to lower feelings of stress, better moods, focus, and memory both early in life, and as we age. Making simple changes to the foods you eat can have surprising benefits. Below we will explore some of the key nutrients for supporting brain health:

B Vitamins – These water-soluble vitamins play a vital role in brain health. Firstly, B vitamins play an essential role in energy production and the brain requires a lot of energy to function properly. Additionally, Vitamins B12, B6 and folic acid are involved with metabolising a compound called ‘homocysteine’ which is associated with cognitive decline. Certain B vitamins are also required for the formation of neurotransmitters which is how the brain sends signals and communicates information with the rest of the body.

Iodine – Foods rich in iodine include fish and seafood sources. Intake of iodine has been strongly linked to cognitive development and IQ levels in children. Iodine plays an important role in thyroid health as well as aiding growth and brain development. Low levels or deficiency during pregnancy is associated with a reduced IQ and cognitive development in the child.

Phosphatidylserine - is a type of fatty acid that has some very special effects, in particular it plays a key role in the activity of neurotransmitters, including acetylcholine, serotonin and dopamine and seems to have a trophic (growth supportive) effect on the brain, which explains its major area of interest – cognitive loss with age. Scientists have been exploring the effects of phosphatidylserine on the brain and numerous clinical studies have revealed important benefits in cognition - especially those functions that tend to decline with age, including memory, learning and concentration, at a daily intake of around 200mg to 300mg. Because it naturally occurs in food, and is very well studied, it can be used long-term.

Choline - Rich in foods such as eggs, poultry and dairy foods, choline is a source of methyl groups needed for many steps in metabolism. The body needs choline to synthesize two major phospholipids vital for cell membranes and of particular importance for brain structure and health. Choline has shown to be essential for cognitive health as it acts as a precursor to the neurotransmitter acetylcholine required for nerve transmission and functioning of the brain. In a community-based population study, results revealed that those with a long-term higher intake of choline in the diet had better cognitive performance.

Omega- 3 - The omega 3 fatty acids found in fish oil and marine algae are thought to be so important for mental health that we wouldn’t be human without them! Leading biologists believe that a good supply of these fats in our diet was essential for the development of our unusually large brains throughout history; the problem is our modern diets are deficient. It is estimated that the average intake of omega 3 from eicosapentaenoic acid (EPA) and docosahexaenoic acid (DHA) is around 250mg per day and only 1 in 4 people consume any oily fish at all. The Scientific Advisory Committee on Nutrition recommends a minimum intake of 450mg from EPA and DHA daily.

Low intake of omega 3 has been implicated in a wide range of mental health issues because these fats make up a significant portion of the lipid fraction of the human brain and play important roles in many neurological functions.

The information contained in this article is not intended to treat, diagnose or replace the advice of a health practitioner. Please consult a qualified health practitioner if you have a pre-existing health condition or are currently taking medication. Food supplements should not be used as a substitute for a varied and balanced diet.